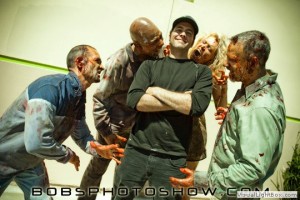 Founder of Alchemy FX Studios; locally reknown artist, David, has an extensive knowledge and notable background in visual arts: illustration/painting and sculpting and film production; having worked initially as professional stage-hand. David has always had a passion for special effects work since a young age. Eventually it made sense to fully immerse himself in the local movie-making scene. Initially starting out as a volunteer, he gained greatly benefitial on-site experience which helped him further develop his technique and skills while finding ways to provide hard-hitting effects for any budget. Since he has developed practical application experience in Special Effects artistry; making custom prosthetics, creature/monster make-up and a multitude of blood treatments, also filling the roles of SFX Art Director.

David has continued to hone his own style while being inspired and influenced by notable industry names, such as: Lon Chaney, Jack Pierce, Stan Winston, Dick Smith and Tom Savini to name a few.